I’ll be spending these last few weeks of summer preparing for my courses and also ruminating about my new project, “Falling”. Until I do my film shoot with stage actress Marianna Bassham, I’m focusing on experiments with materials and sketching out visual possibilities. Even though I enjoy brainstorming, I always have contradictory feelings about this stage of the process; part of me is exhilarated by the possibilities, while the other side of me is completely terrified by the fact that the project is so new that anything is fair game. To keep myself from feeling completely overwhelmed while providing some kind of starting place, I like to state the “facts” of the project:

The other place I like to start when I’m at the very beginning of a project is to think of the most literal, cliche interpretation that I can come up with, just so that I can eliminate it. I did a Google image seach of “Depression” and observed that almost every visual depiction of depression was of either 1) a human figure clutching their heads or 2) a seated figured curled up with their head in their arms. Sometimes the only way to figure out what you want is to simply state what you don’t want. 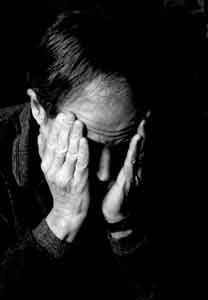 In terms of materials, I’ve recently been considering silverpoint drawings, a medium I’ve never used before but have always had interest in. I’m thinking about silverpoint because of it’s inherent fragile, delicate, and ethereal qualities. I’m intrigued by the idea of creating drawings that appear visually fragile, but which depict violent and aggressive movements. The simultaneous fragility and aggression of the figure is a contradiction that is central to the themes in this project.