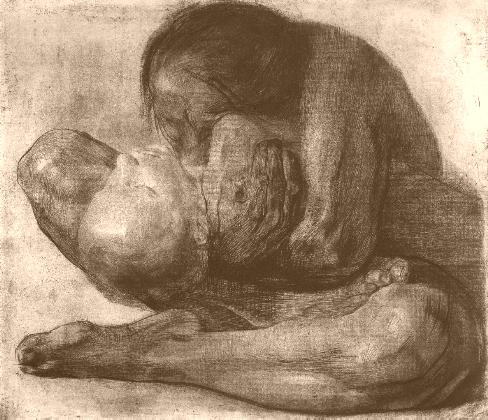 While I’m constantly looking at and searching for new artists for inspiration, there are two artists who have always influenced me throughout my life: Alberto Giacometti and Kathe Kollwitz.  This week I’ve been thinking a lot about Kollwitz’s anguished figures and in doing so, making some realizations about what direction to take with my own figures. I had my head so wrapped up in the idea of layering multiple figures for these drawings that when I realized that approach wasn’t working, it was a big disappointment.  As I mentioned in my last blog post, it seemed that a single figure was an option. However, I had concerns over whether it would be boring, and lack the emotional power I was looking for. Looking at Kollwitz’s drawing today got me realizing that here was an artist who produced work of such genuine emotional intensity. In many cases, her work showed what was real: a single figure gripping another. (see image below)  There is nothing surreal about it, no visual gimmick, just the brutal reality, the raw emotion of the scene. Then I realized that the layering of multiple figures I had been wanting to do was just that: a visual gimmick that I thought would somehow make the drawings more interesting.  So here’s what I’m going to do: strip my figures down to their most primitive state and create fifty single nude life size figure drawings. When I say it out loud, it makes so much sense now, even though the idea is so simple.  It’s amazing to me how far we have to travel only to come to the realization that what we needed was there all along.