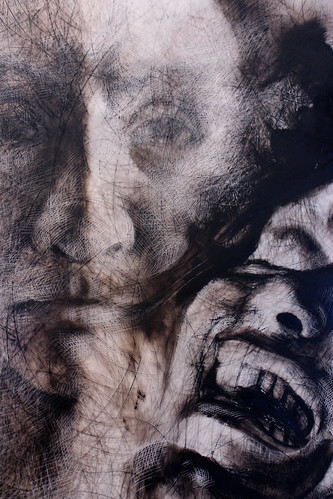 I have 4 weeks left until I install my exhibition at Simmons College, and there is still so much that needs to be done before then.  It looks like I really will be working up until the last minute.

Over the past week, I’ve been working on adjusting several of the large figure drawings, mostly scraping away at the etching ink areas with an x-acto knife. I’ve been trying to get the figures to become more transparent, and to soften the transitions in the tonal areas so that they are more gradual.

One aspect that has come up in the scraping process is that for some reason, areas that are scraped with the x-acto knife have a slightly different color than the etching ink areas.  In some ways, this introduces a third color into the images.  The etching ink is very brown, the lithographic crayon is a fairly straightforward black, while the scraped areas verge on looking blue by comparison. The issue is that when I scraped one area of the drawing, that color difference really stood out a lot against the rest of the drawing. I ended up scraping significantly more than I initially planned on, in order to more evenly distribute the scraped areas throughout the entire drawing.  This way, the color change from the scraping process won’t appear to be isolated to one area.

One thought on “4 weeks”