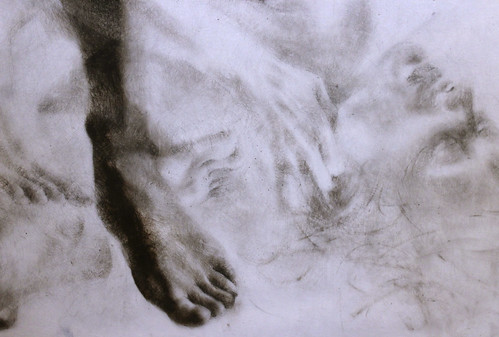 This sixth and final drawing that I’ve been working on recently has proved to be more work than I initially thought. With the exception of the central standing figure, the other figures in this drawing are extremely light and suggestive. I thought for this reason that it would be less work. On the contrary, I discovered that the quickest way to get the subtleties I was looking for was to “overdraw” the figures and then scrape them down. It was really difficult to directly smear the etching ink in a subtle manner, so the only way I could get the lightest tones was to scrape with the x-acto knife. I’m sure I spent more time scraping than I did actually drawing with the etching ink.

I did finish this drawing today, which felt terrific.  This means that all six large scale drawings for my upcoming solo exhibition at Simmons college are 99% complete.  I have just enough time to review each drawing and make slight tweaks, but the work needed for this show is pretty much done.

November is going to be an avalanche of events; I’m participating in Waltham Open Studios on Nov. 1 & 2, and then I have the Simmons exhibition and the solo exhibition at Framingham State immediately afterwards. My calendar is a little scary looking, but it’s nice to know that the work is finally done. 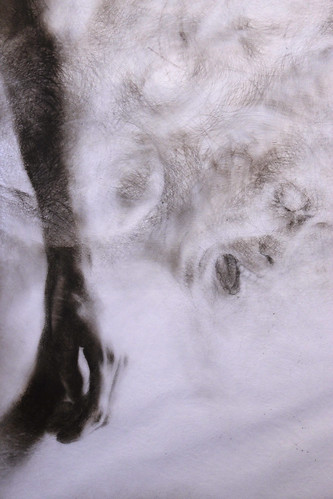 One thought on “Scraping”