I know that some of you tuned into yesterday morning, hoping to see my charcoal drawing demo that we had initially planned to stream on our Twitch channel.  I prepared everything for the shoot well in advance with my usual anal retentiveness, did a rehearsal of all the software, equipment, etc. three times through in advance of the stream and felt confident that everything would be fine.  The studio we were in was the same studio used when we shot the prototype videos, so it was a familiar space. The plan was to stream the drawing demo through 3 smart phones, which would allow 1 camera that was aimed toward my face, one camera on the drawing, and one camera on the model. (see image above)

Yesterday’s shoot was one gigantic experiment, and was a totally different format than when we used only 1 camera for the videos in our finished prototype, which we shot way back in October 2015. Below is a tiny slice from one of our videos in the prototype.


I had Olivia, one of the ART PROF interns on hand to help with the shoot, with Marianna as the artist model.  My partner Tom Lerra was there as well to help oversee the shoot. We got into the studio, set up a scary number of extension cords hooked up to multiple tripods, stands, fiddled with lights and backdrops, wrapped gaffer’s tape to get every phone positioned, for at least 1 hour.

The simplest way to explain our set up (because it was anything but simple)  is that the 3 smart phones have to connect to a laptop through the Internet-and that’s when all of our problems started. We were on the guest wi-fi network, which we discovered after setting everything up had a firewall which prevented the set up from working properly. We tried the employee network, which didn’t work either.  Tom volunteered the network on his iPhone which eventually worked. This was at least 1 hour of troubleshooting with us frantically re-configuring everything, Tom scrounging for phone chargers, and other desperate measures. 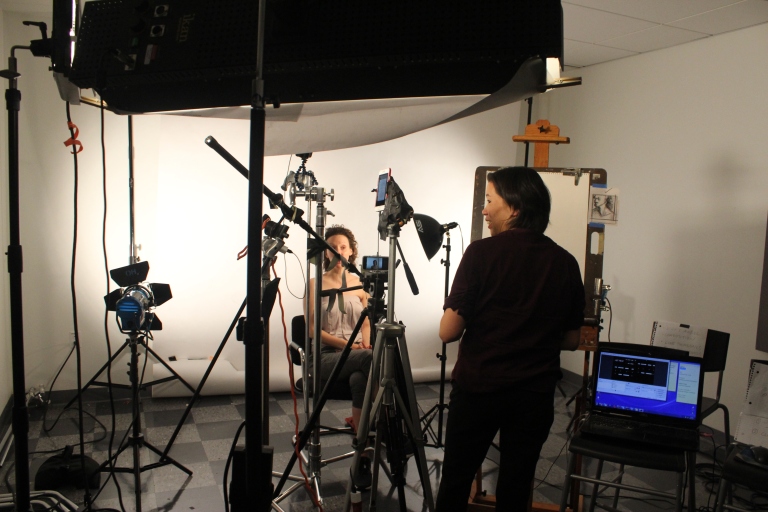 Once everything was finally up and running, we discovered, after many attempts that even the network on Tom’s iPhone wasn’t strong enough, and the streams that we did get onto Twitch were breaking up and going offline without us knowing.  We kept at this for about another 2 hours, with a lot of panicked phone calls, texts, and Facebook messages to my husband Alex Hart, who probably has logged more uncredited work hours than any person in history because of ART PROF. (he’s getting public acknowledgement today for the first time since ART PROF started in September 2014)

Eventually, we decided that we couldn’t waste any more time trying to fruitlessly do Twitch, have it never work out, and then leave the studio empty handed.  So we ditched the Twitch stream, and decided to just record the video, which we knew would guarantee that we would leave with video footage which could be posted on our Youtube channel later. At that point I had probably done the first few parts of the demo at least 5 times, and we had to start all over from the very beginning to record the video. I’m all for risk taking, but when the risk is so incredibly that high that you’ll end up with nothing, the route than guarantees something (as opposed to nothing) is the way to go.

Yes, about 10 billion things went wrong yesterday, and as much as I wanted to tear my hair out every second of that 7 hour long shoot, I kind of found it super exciting at the same time. I was kind of a wreck afterwards, but we did come out of the studio with over 60 minutes of footage, with the demo from beginning to end.  And I am so grateful to Tom, Marianna, and Olivia for their resilience, tenacity and unwavering patience through a 7 hour shoot long shoot that was anything but smooth.

Olivia must have saved the day from disastrous consequences at least 12 times yesterday. There were so many tiny details where she would point out “Didn’t you forget about…. Shouldn’t you….?” When you’re on set like that, you need people like that to catch those little details that could make or break your production!

And although I’m bummed that Twitch didn’t work out, and felt horrifically guilty when I found out later that Nikki Murphy-Epsimos had planned on streaming the demo to her middle school art class, I am glad that we had this experience, and that we’ll have the entire demo ready for all of you to watch on our Youtube channel next week. So our sincerest apologies to those who were looking for the stream yesterday, and couldn’t find it!

Sometimes even the best laid plans don’t work out, but Tom and I saw yesterday as a tremendous learning experience, and both of us were kind in awe that we got the results we did with just 3 smart phones and a laptop. Our creative juices started flowing like crazy, and we realized that there are many, many options for how to extend and stretch ART PROF to last longer if our Kickstarter campaign is successful.

The experiences I’ve had where I felt I learned the most, always tend to be under the most difficult, strenuous circumstances, and yesterday was certainly no exception. ( I don’t know why I can’t have a learning experience while sitting on a beach with a cocktail.)

With my partner in crime, Tom Lerra from WGBH Boston.

ART PROF is a free, online educational platform for visual arts for people of all ages and means. artprof.org features video courses, art critiques, an encyclopedia of art supplies, and more.

ART DARES
Every month, we assign a topic for you to respond to with an artwork. We give out prizes in several categories!  More info.

ASK THE ART PROF was a written column in the Huffington Post from about art related topics. Visit our Pro Development page.