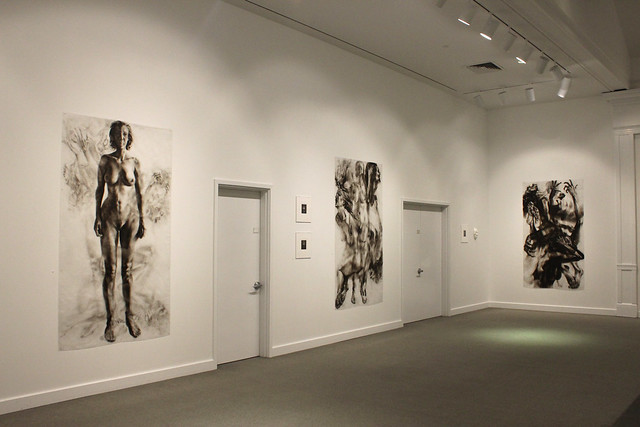 I’ve been absolutely consumed with my art education project that is being announced June 14, (subscribe to my email list if you want to know what it is!) so for the past 2 years, I haven’t produced a single piece of artwork.  In 2014, I had simultaneous solo exhibitions at the Trustman Gallery at Simmons College and the Mazmanian Gallery at Framingham State University of works from “Falling“, a series of drawings, prints, and sculpture I worked on from 2010-2014 that explored my personal experience with depression.  I was so stressed out from the year leading up to those exhibitions that consequently, I lost my drive to continue producing artwork.  I knew this was a serious plateau I had reached because I knew that no matter what project I did next, it would be absolutely nothing like my previous projects, (Wading, Waiting, and Digging) all of which followed relatively similar paths.

I’m absolutely floored by this complete halt of creating artwork, and that it’s lasted 2 years.  I was initially horrified that I had no motivation to make artwork-there’s nothing more terrifying than feeling the drive you’ve devoted your entire life to drain away from your mind and body. Then my art education project started to take off, and my passion directed itself elsewhere in a new and different form.  At that point, I stopped feeling guilty about not making artwork the way I had in the past, got really excited about the possibilities for my art education project.

But then,  just a few hours ago, an idea for a series of drawings slapped me in the face, really hard. I felt the first explosion of passion and inspiration that I haven’t felt in 2 years. Simply put, I want to create a series of nude drawings of the elderly. When I think about it, there are so few images of elderly nudes in history, the only two that are prominent are the “Old Market Woman” sculpture from Hellenistic Greece, and Rodin’s “The Helmut Maker’s Wife.” There are also 3 major sources of inspiration I can point to for this project idea:

Gawande and Chast’s books were fundamentally about the same subject of aging, but were incredibly different in terms of both the articulation of the subject and their point of view, Gawande as a doctor, Chast as a cartoonist. I found both books absolutely riveting and remember reading Chast’s book back to back in one sitting.  In Chast’s book, there’s a section where she explains that in the moments immediately after her mother passed away, she says “I didn’t know what to do, so I drew her.”  Chast’s drawings of her mother were some of the most intimate, powerful drawings I’ve ever seen and I found myself emotionally moved by her drawings in a way that I rarely experience.

This drawing of the artist model Pearl reclining is one of my favorite drawings I did my senior year at RISD. I have no idea why she put a tissue over her eyes that day when she was posing in class, but it made for a striking set up that no longer looked like a drawing class exercise. Drawing Pearl was an extraordinary experience. Because she was 85 years old, the physical aspects of her body were like nothing I had ever seen before, the sagging and stretching of her tendons and muscles, the texture of her skin, and her awkward physical movements were completely mesmerizing. She would sit in a chair for literally 4 hours straight.  Every now and then, her head would drop down, as if she had fallen asleep, and then 20 minutes later, she would slowly bring her head back up in to the exact same position she had been posing in.

With my major project coming June 14, there’s no way this project is going to start even within a few months.  However, already, my mind is racing about all of the possibilities, and I like the idea of letting a project concept simmer slowly in my head over a long period of time before starting. I can imagine already there are going to be major logistical hurdles I will have to clear in terms of finding people who are willing to participate in a project like this, but that’s exactly why it’s good for this project idea to sit in my head for a few months before I take any action.

A sculpture of Pearl I sculpted based on my memory of her figure in 2002.

ART PROF is a free, online educational platform for visual arts for people of all ages to learn visual arts in a vibrant art community. Imagine all of the resources here on our blog, except exponentially bigger, in greater quantity, and in more detail. Our Kickstarter campaign hit its $30k goal on July 19!  Get info on our future launch by subscribing to our email list.