“What is the best way to simplify the human figure? As cubes or as spheres?”

The answer is neither.  I see people all the time trying to reduce the human figure into a series of geometric shapes when they’re drawing from a live model.  They draw spheres where there are joints (wrists, shoulders, elbows, etc.) and it always ends up looking like an awful mannequin. The problem with this approach is that cubes and spheres used in this manner have nothing to do with the actual anatomical structure and forms of the human figure.

1)Major Masses
Major masses are essentially the largest forms on the human figure.  I recommend beginning a figure drawing by first addressing the torso, by far the largest form. The torso is where all of the limbs and the head intersect, so it’s critical to knock in the torso immediately when starting a figure drawing. The torso can then be subdivided into a rib cage and pelvis, which provides a sense of structure within the torso itself. From there, the head and thighs can be quickly added to provide more mass to the form. The limbs and the hands and feet should come in last. 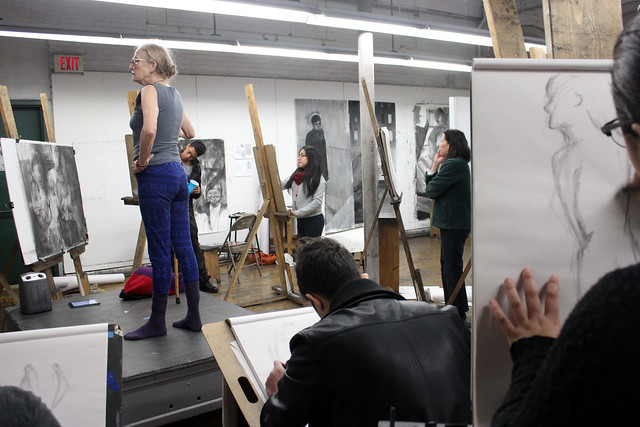 3)Bony Landmarks
Bony landmarks are areas on the human figure where the bone is directly under the surface of the skin. These landmarks are significant because they are consistent with every single person, regardless of how large or thin they may be. When you’re looking at a model, search for these bony landmarks and indicate them in your drawing. Some bony landmarks include:  collar bones, elbows, kneecaps, ankle bones, shoulder blades, etc. Bony landmarks are considered to be details, so they should not be drawn in until the major masses and center line are well established.

ART PROF is a free, online educational platform for visual arts for people of all ages and means. artprof.org features video courses, art critiques, an encyclopedia of art supplies, and more.

ART DARES
Every month, we assign a topic for you to respond to with an artwork. We give out prizes in several categories!  More info.

ASK THE ART PROF was a written column in the Huffington Post from about art related topics. Visit our Pro Development page.

2 thoughts on “Ask the Art Professor: What is the Best Way to Simplify the Human Figure in a Drawing? As Cubes or as Spheres?”